By Tim Barton In Omnichannel

We’re just two days removed from Cyber Monday 2015 and less than a week after Black Friday and the general consensus from several retail industry insiders and observers is this: the big winners were Amazon.com and the online channel in general.

Here’s a snapshot of the “early returns”:

A National Retail Federation survey of more than 150 million consumers revealed that more people shopped online than in stores during the Thanksgiving and Black Friday weekend, a telltale sign of how significantly American shopping habits have evolved. Foot traffic at malls nationwide was down slightly and spending down even more so, retailers are reporting. 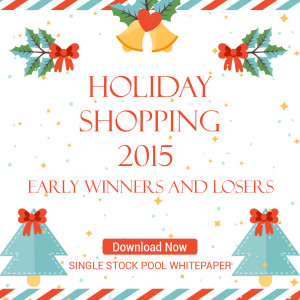 Target, Wal-Mart, Kohl’s and Radio Shack before Thanksgiving and many shoppers took advantage to find the best deals.

A second reason is that many consumers waited until Cyber Monday to break out their debit and credit cards for the real spending. The proof point here is that Adobe reported that Cyber Monday was the biggest and most lucrative online shopping day ever with consumers spending $2.98 billion online. This represented a 12 percent increase over 2014. Globally, consumers spent $11 billion for the entire period between Thanksgiving and Cyber Monday, a year-over-year increase of 15 percent.

During the mad rush, how well did retailers manage inventory? Moderately well, based on Adobe’s data, which revealed that 13 percent of product views yielded an out-of-stock message, twice the normal amount.

What are the most sought after items this season? Star Wars toys and video game bundles and the Fisher-Price Imaginext Supernova Battle Rover among the items most out of stock, Adobe reported.

As these numbers would suggest, eCommerce is clearly being crowned as the “winner,” yet, the store is still where 90 percent of retail sales are actually transacted. Retailers’ online business is obviously growing, but they continue to struggle with making this channel profitable while meeting shoppers’ heightened expectations for convenience, and Amazon-like perks, like free shipping. Retailers need to focus on making their customers’ in-store shopping experience more personal, more like shopping online, and more customized to the needs and wants of each shopper.

In a few days we will have more to say about the role of “brick and mortar” stores relative to their online counterparts in the broader context of an omnichannel market report of North American consumers. So, please stay tuned.

And, at the NRF Retail’s Big Show 2016 we will compare and contrast the North American report with a European report that will reveal some rather interesting findings. At NRF (booth #4063), we will show how a complete omnichannel retail management solution incorporating terminal and mobile POS, eCommerce, loyalty management, inventory management and digital passes can help retailers create happier and more engaged customers.

In the meantime, what surprised you about Black Friday and Cyber Monday 2015 shopping? What was your experience like? Did you do more shopping online or in the store?