Somewhat unbelievably, the halfway point of the year is almost upon us. As ever, the pace of change in retail has increased, and we’ve seen consumer behavior evolve, new retail players emerge, old retail players fall by the wayside, and strategies adapt to this ever-changing landscape.

Some of the changes we’ve seen over the past six months could have easily been forecast – the growing influence of mobile in the omnichannel experience, for example. Others have been a sudden plot twist. But what have we learned from 2016 to date?

Here are my three key retail lessons from the first six months of 2016, and how they will impact retailers going forward.

Keeping up with the evolution of retail is not a new phenomenon, but it’s a challenge that continues to claim victims. BHS, Austin Reed, Blue Inc, Sports Authority, Vroom and Dressman are just some of the retailers to shutter their stores since the New Year.

While the individual reasons for their poor fortunes vary, each of these troubled retailers have one thing in common: their proposition was misaligned with the modern shopper’s expectations. Therefore, business intelligence and knowledge of the customer is absolutely critical to retailers’ strategies going forward.

The growth of omnichannel retail technology has started to bridge the divide between digital and physical shopping, and this year we’ve really started to see discussions around how this capability is changing workforce responsibilities in the store environment. 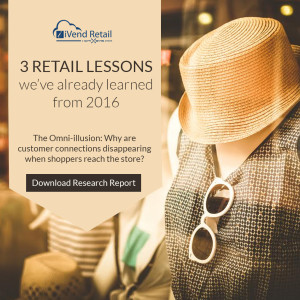 In addition to enabling richer customer experiences, store technology such as mobile POS is giving each individual member of staff the power to do more and improve quality of service. This will ultimately lead to a future where fewer sales associates are needed on the shop floor, but those that remain will be much more empowered.

We’ve really seen a shift this year in retailers’ loyalty schemes, from points-based programs to much more effective incentives for shoppers. As we discussed in a recent blog post, price is out, value’s in, this is reflective of the demand for convenience and personalization, driven by the consumer.

Over the next six months, we are going to see a widening gap between those retailers that embrace the evolution of loyalty, and those that persevere with their current models. There will always be an appetite for discounting in loyalty, but shoppers are now coming to expect a higher level of sophistication and customization in the rewards they are being offered.

So, if these are three of the most significant changes so far in 2016, what can we expect from the next six months?

Certainly, as we head towards the peak Christmas trading period, the contrast between those retailers who have invested in their operational infrastructure and those that haven’t will show. The continual increase in multi-channel shopping, rapid fulfilment and cross-channel interaction means this will be the most complex year yet for delivering on customer promise, and will place much greater pressure on back-end systems.

Equally, the level of consistency and relevancy achieved across channels will begin to impact the customer experience at an even greater level. When we ran the research for our recent Omni-Illusion report, there was a clear demand among shoppers for a single view experience, and that includes being able to interact intuitively, wherever they choose to shop.

The one thing we know for sure is that retail never stands still, and the consumer is going to push retailers in new and interesting directions. I’ll meet you back here in six months’ time to see how things have evolved.